WRECO hosted a Chinese delegation of engineers for a seminar and a field visit in December. Dr. Han-Bin Liang, President of WRECO, came across this opportunity through the Chinese American Environmental Professional Association (CAEPA). The engineers were flood control engineers and officers from the Shan-xi Province of China and traveled to the U.S. to learn more about new approaches to flood control project design. Dr. Liang gave a seminar on the environmentally friendly engineering approach to designing flood control projects. Afterward, he took them to the Don Edwards San Francisco Bay National Wildlife Refuge in Newark to learn about the importance of wetland restoration and the wetlands' role as part of the regional flood control system.

WRECO is part of the Warm Springs Constructors team (Kiewit and MEC) that was selected to design and construct the BART Warm Springs Extension Project. WRECO will work on drainage design for the BART Warm Springs Extension project for the track corridor south of Grimmer Boulevard to the Alameda County Flood Control & Water Conservation District Zone 6 Line F Channel. WRECO will also perform drainage, grading, and stormwater best management practices design for the Warm Springs Station area, which is approximately 25 acres and will include numerous biofiltration swales to treat stormwater runoff. 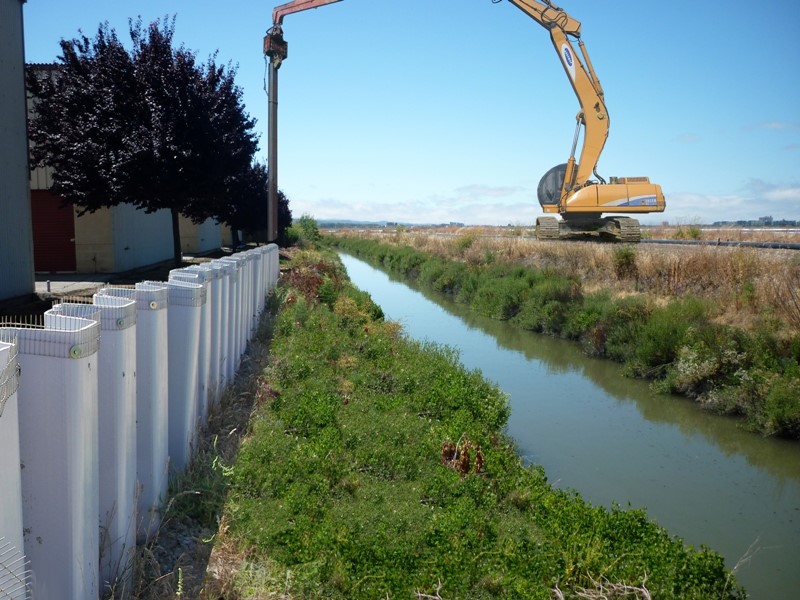 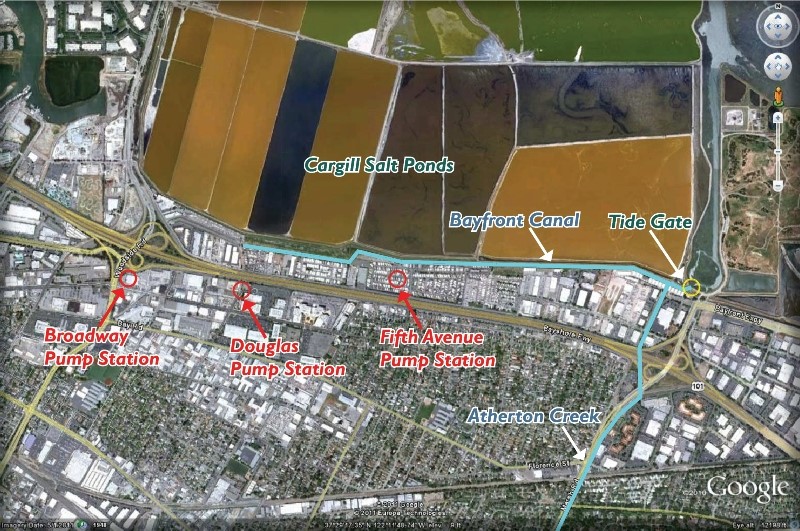 The Bayfront Canal is a drainage discharge point for the City of Redwood City and various neighboring jurisdictions, which include unincorporated areas administered by the County of San Mateo, the cities of Atherton, Menlo Park, and the Town of Woodside. The Canal extends from Douglas Court to Marsh Road adjacent to the Cargill salt ponds. Tide gates were installed to eliminate backflow of tidal water into the Canal during high tide and to allow outflow of runoff from the Canal during low tides. The confluence of Atherton Channel and the Bayfront Canal occurs just upstream of the tide gates. The Atherton Channel is a significant source of runoff, conveying stormwater flow from three quarters of the Canal's basin. The City experiences chronic flooding in the surrounding neighborhoods of the Canal and Atherton Channel as a result of the insufficient detention capacity during periods of high tide. The City contracted WRECO to perform a technical study on the feasibility of using the floodwall for flood protection and prepare design plans for the proposed improvements.

WRECO is assisting the City of Belmont with roadway improvements and conceptual drainage design for areas with problematic flooding in the city including Hillman Avenue and Ruth Avenue. The project consists of two parts: Part A includes drainage and roadway improvments for slope stability on Hillman Avenue; Part B is a conceptual plan for drainage and street improvements in the Hillman Avenue and Ruth Avenue neighborhood. Drainage improvements proposed include adding a detention basin on North Road to detain the runoff that currently overwhelm the downstream drainage system near El Camino Real. Challenges on Hillman Avenue include a narrow winding roadway with steep slopes and a lack of underground drainage systems to prevent surface runoff from deteriorating roadway pavement. Runoff goes into residential properties and causes nuisance flooding.

WRECO participated in the Golden Gate Audubon Society's monthly habitat restoration volunteer day at the wetlands at Pier 94 in San Francisco on August 6, 2011. WRECO staff removed invasive species such as Yellow Star Thistle, Black Mustard, and Alkali Russian Thistle. Removal of such species allows for local species, such as Pickleweed, to thrive and support the overall habitat. Audubon Society members brought binoculars and gave us an introduction to coastal bird-watching, and also showed us some recent attempts to establish several endangered plant species in the wetland area.

WRECO is on the design-build team for the Presidio Parkway Project located in the City of San Francisco, working with Golden Link Concessionaire for Caltrans District 4. The project will reconstruct approximately 1.6 miles of Doyle Drive, the south access road to the Golden Gate Bridge, with the Presidio Parkway. The new roadway will be a six-lane facility including tunnels, bridge structures and increased pedestrian and bicycle connections within the Presidio. WRECO is providing drainage and stormwater treatment design, which includes runoff storage and detention boxes, a stormwater pump station and permanent stormwater facilities. The design had to take into consideration the nearby Park Presidio and also fit in environmentally and aesthetically with the surrounding community. WRECO is also providing Bridge Design Hydraulic Studies including tidal and tsunami analyses due to the project's close proximity to the San Francisco Bay.

The Russian River at State Route 128 Bank Protection and Restoration Project received a 2011 Excellence in Transportation Award in the Environment category from the California Department of Transportation. The project involved emergency bank protection, as the erosion and scour of the westward shifting thalweg had resulted in the loss of significant vineyard area and threatened the State Route 128 bridge structure. WRECO's complete design plan was completed in less than one month, incorporating bioengineered design as required by environmental permitting agencies. The design used longitudinal peaked stone toe protection techniques that included willow plantings and sacrificial rock vanes to redirect the thalweg away from the bank. WRECO provided construction support and is providing post-construction monitoring to assist Caltrans with an evaluation of the effectiveness of the project. WRECO is currently investigating design options such as the installation of additional rock vanes, laying back slopes and modification to the existing rock slope protection to further protect the bridge. Since construction, the main channel of the Russian River has been successfully shifted away from the vulnerable scarp.

More than 400 obsolete wind turbines are being decommissioned and removed from the Altamont Pass Wind Resource Area in southeastern Contra Costa County. The turbines will be replaced with 50 new, larger and more efficient turbines. One of WRECO's Qualified Storm Water Pollution Plan Practitioners (QSP) is conducting weekly site inspections, as required by the National Pollutant Discharge Elimination System Construction General Permit. During these inspections, the QSP documents and photographs best management practices (BMPs) and recommends additional BMPs, as well as any necessary maintenance. Currently, the installed BMPs include silt fence, fiber rolls, and tracking control pads. Additionally, the QSP will conduct inspections before, during and after predicted rain events and will sample the turbidity and pH when there is a ½-inch or more of precipitation. The large construction site area, hilly terrain and high quantity of heavy machinery have been particular challenges at the project site.

WRECO has graduated from the Calmentor program, which is a mentor-protégé partnership between two firms, sponsored by Caltrans District 4's Architectural and Engineering program. One of the program's goals is to promote small business involvement in California transportation projects. Protégés also learn techniques to grow their businesses. WRECO was teamed with mentor, CH2M HILL, to learn about project management training, scheduling, design, general accounting practices, marketing strategies, team building methods and corporate culture. WRECO was able to get a sense of the larger firm's refined project management and quality control programs in order to improve our own programs.

WRECO is providing sedimentation data for the draining, or draw-down, of the Balch Afterbay reservoir and the dredging of sediment blocking two low-level outlet gates in the reservoir. The dam is located on the North Fork of the Kings River, east of Fresno, California. The 60-inch diameter low-level outlet gate is currently inoperable, stuck partially open, and spilling approximately 400 cubic feet per second of flow. The reservoir must be mostly drained to allow for gate closure. WRECO performed sediment transport analysis to determine the possible volume of sediment erosion in the reservoir that would occur during draw-down operations and travel downstream to be deposited into the flushing pools before the repair of the 60-inch diameter low-level outlet. WRECO is determining the required flow magnitude and duration to flush the sediment out of the downstream pools in Kings River, which are located downstream of the Balch Afterbay Dam.

WRECO is evaluating the potential for scour and bed degradation that could damage two parallel Pacific Gas and Electric Company (PG&E) natural gas transmission lines, lines 400 and 401. The study is located where the lines cross beneath the Sacramento River, nearly 4 miles southeast of the town of Red Bluff. The lines run from the California/Oregon border, near Malin, Oregon to the San Francisco Bay Area. WRECO performed a reconnaissance-level geomorphic investigation, as well as a hydraulic and bed evolution analysis that used a 1-D model to simulate bed evolution over an extended period of flow records. WRECO also developed a proposed program to monitor streamflow and scour, as well as provided descriptions of mitigation approaches, should the monitoring program discover significant scour.

WRECO developed the sediment study for the Poe Reservoir Project for Pacific Gas & Electric Company (PG&E) in Plumas County. The project is one of 10 hydroelectric projects in the North Fork of the Feather River drainage basin, located upstream of Lake Oroville. PG&E was evaluating various options for the radial gate repair including construction of a coffer dam that would allow access to repair the gate, while minimizing potential erosion and sediment release. The purpose of the sediment study was to evaluate the trends and volumes of sediment erosion and analyze scenarios based on different coffer dam heights and sediment flow rates. The study results would enable PG&E to conduct evaluation on the engineering aspects, their associated costs, and their potential environmental and generation impacts/mitigations based upon the recurrence intervals for the short-term versus the long-term needs.

WRECO is designing sidewalk improvements for the City of San Mateo that will provide pedestrian access along Woodland Drive to Aragon High School. Design features include pedestrian-friendly lighting, disabled access ramps, and a new crosswalk. These will enhance the safety of Woodland Drive for the students and the neighbors who live in the vicinity of the high school.